The gift that keeps on giving: Thailand’s scaly quest for food security and sustainable livelihood

The gift that keeps on giving: Thailand’s scaly quest for food security and sustainable livelihood 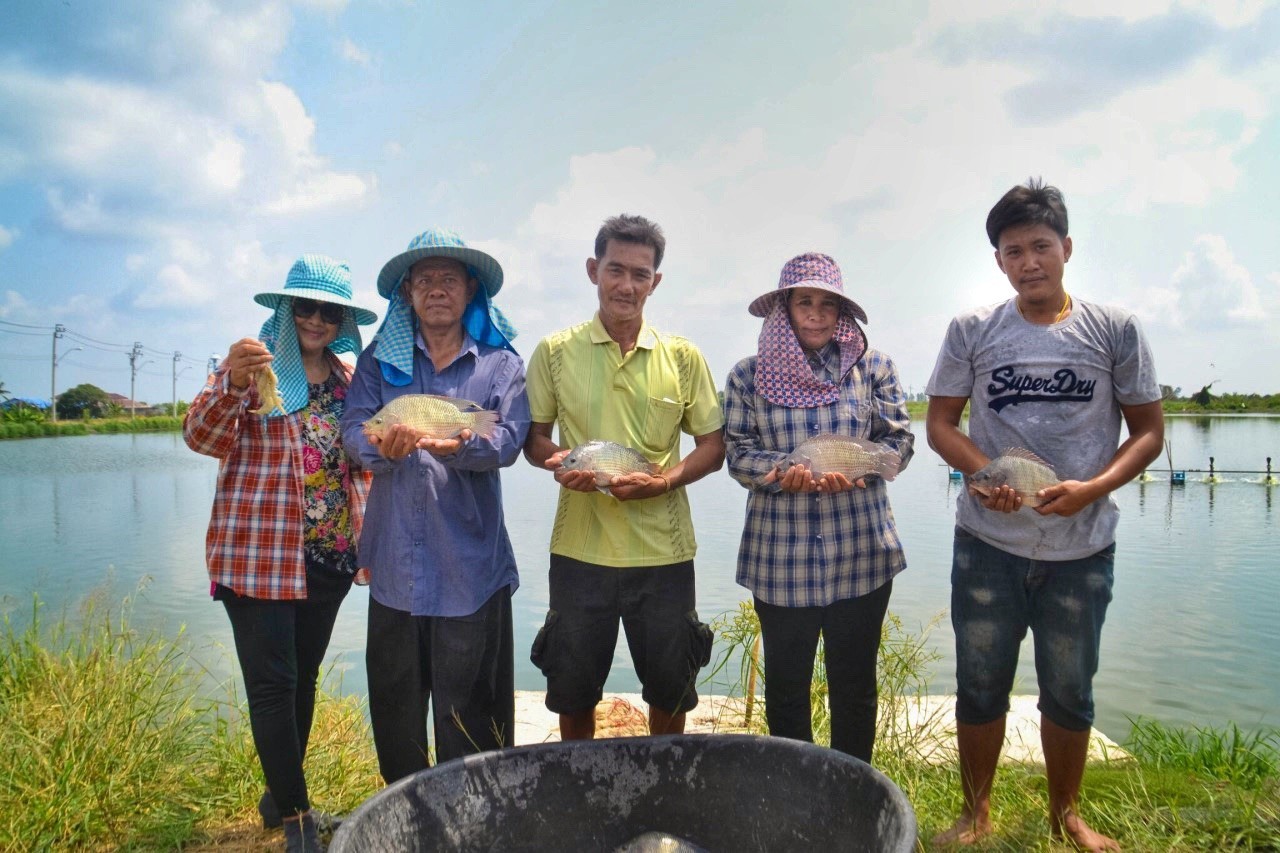 (Photo courtesy of the Department of Fisheries, Thailand)

“There is rice in the fields and fish in the water,” is an old saying that speaks to the natural abundance of Thailand as the land of milk and honey with fresh, affordable food aplenty. Most Thais are experts when it comes to naming freshwater fish, which is an easily accessible source of quality protein. There is, however, one particular fish that has become a common household name but its exact origin is unknown to the younger Thais.

The mouthbrooder --- a name it received from cradling its hatchlings in its mouth until the younglings come of age --- is also known to scientists as Oreochromis niloticus or Tilapia nilotica, a cichlid fish native to the northern half of Africa and some parts of the Middle East. Colloquially named Nile tilapia in English from its natural habitat and pla nil in Thai from an abbreviation of its scientific name, this hardy fish whose versatility as a herbivore with omnivorous tendencies and trimester hatching cycles is ideally suited for any freshwater source. The story of this fish began in earnest with a school of 50 mouthbrooders raised in a palace pond whose offspring would one day go on to feed millions of people.

The origin of the fish’s local popularity could be traced back to the visit to Thailand in 1964 of Emperor Emeritus Akihito, then the Crown Prince of Japan. While visiting the Museum of Fisheries at Kasetsart University, the royal guest who is an avid ichthyologist, was particularly pleased with the variety of fish specimens at the museum. Then a specimen of goby fish first discovered in Thailand caught his attention.

(Pla Nil or the Nile Tilapia. Photo courtesy of the Department of Fisheries, Thailand)

With his encyclopedic knowledge of fish, he enquired: “Is this the fish that Dr. Smith found?” This very utterance carries a special meaning for two reasons: firstly, the fish was named “Mahidol Goby Fish” in honour of Prince Mahidol Adulyadej, the Father of King Bhumibol Adulyadej The Great; and, secondly, the species was first discovered and named in 1953 by Dr. Hugh McCormick Smith, a leading ichthyologist, who was engaged by King Vajiravudh, the uncle of King Bhumibol Adulyadej The Great, to set up the country’s Department of the Protection of Aquatic Animals. Dr. Smith, later on, became the first Director-General of this very department.

That historical visit created a long-lasting bond between the current Emperor Emeritus of Japan and the previous monarch of Thailand, united through their interests in the study of fish. The serendipitous event set in motion a series of events that introduced “pla nil” as the common Thai household’s go-to source of affordable protein, popularized by its tasty and tender flesh usually fried, grilled or cooked with other ingredients that create the Thai style umaminess.

In 1965, King Bhumibol Adulyadej The Great would write to request tilapias from Crown Prince Akihito who responded by gifting him with 50 Tilapia nilotica. The first batch of pla nil was kept in a pond at Chitralada Palace, the King’s royal residence. The fish made the palace its home, and quickly multiplied. Up to 10,000 fingerlings were later donated to the Department of Fisheries. Since then, the fish can be found in rice paddies, ponds and other water sources in all corners of Thailand.

This means that those in need of a hearty meal rich in protein could simply take their pick from backyard ponds, flooded rice paddy fields and communal water sources. In fact, it was the late King’s ingenious idea to introduce the fish to rice farmers so it could be reared in flooded rice fields during plantation season. Rice farmers could receive the full nutrients they need with carbohydrates from rice and protein from fish. The farmers could also generate extra income from farming fish while awaiting rice harvests.

Access to such quality protein enables most Thais to develop a level of resiliency against external volatilities, or a certain “self-immunity.” This is in line with the Sufficiency Economy Philosophy (SEP) that seeks to ensure a level of protection against unforeseen shocks and externalities while fostering sustainable food security according to SDGs Goal 2 of ending hunger, achieving food security, improving nutrition and promoting sustainable agriculture.

With royal support and guidance, the Department of Fisheries was able to innovate aquaculture technologies that would facilitate mass production of Nile tilapia for large-scale, commercial farming. The latest innovation entails the cradling of the fish eggs inside artificial trays that mimic the conditions of the parent fish’s mouth, thereby reducing the rate of mutation and premature loss of life naturally associated with natural mouthbrooding process. Thanks to this technique, Nile tilapia can nowadays be mass produced at a capacity of 220,000 tonnes per annum with over 300,000 fish farmers countrywide adopting the latest technology.

Fish farmers are also getting more innovative with processing their products. Instead of relying solely on selling white meat to markets, progress is underway to diversify products to tasty snacks such as fish chips or baked fish with herbs as ready-made meals for modern consumers. In so doing, the fishermen are also aiming to cut the vicious cycle of middle men.

Since the first school of Nile tilapia arrived in Thailand, the Department of Fisheries has been successful in developing new strains of fish that are easier to raise and more resistant to diseases. One of them, Chitralada 3, was brought to Mozambique as part of the project to train locals on how to raise the fish as an additional source of food in their locality. Pla nil was brought back to its home continent and the hatchery in Mozambique can now breed new fingerlings of Chitralada strain tilapia themselves.

(Pla nil farming pond being prepared by local farmers in Mozambique.
Photo courtesy of the Royal Thai Embassy in Maputo.)

From its humble beginnings as gifts to a friend formed out of the love for science and zoology, the Tilapia nilotica is a gift that keeps on giving beyond borders. Tens of thousands tonnes of pla nil are produced annually, providing stable livelihoods to countless families in Thailand and abroad. It also supports food security, economic prosperity and provides a steady source of income in line with the Sufficiency Economy Philosophy.

A Philosophy that Empowers from Within